Samuel D. Conte (1917-2002) founded the Department of Computer Science at Purdue University in 1962. His vision and active involvement nationally and internationally played a vital role in defining the discipline of computer science worldwide. 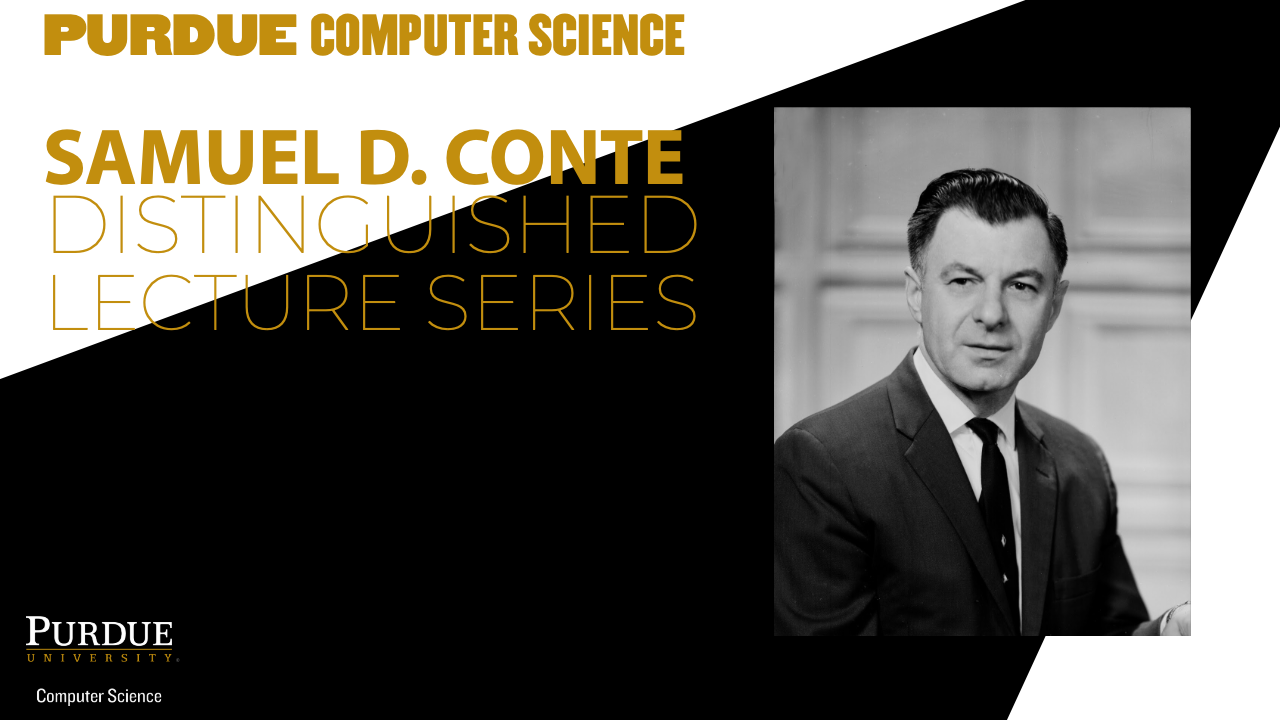 Each year, the Department of Computer Science faculty identify computer scientists who are recognized as leaders in the field and whose ideas and research command the attention of the students and faculty.  A select group of individuals are then invited to be a part of the annual Samuel D. Conte Distinguished Lecture Series on Computer Science.

In 1993, the Samuel D. Conte Endowment was established to honor Dr. Conte and his devotion to excellence in teaching and research in computer science. The Samuel D. Conte Lecture Series, sponsored by the endowment, serves as a permanent testimonial of his contributions to the Department of Computer Science, Purdue University, and the computing field.

Abstract: Moore´s law has conventionally enabled increasing integration; however, fundamental physical limitations have slowed the rate of transition from one technology node to the next, and the costs of new fabrication facilities are skyrocketing. Despite this, emerging applications such as machine learning have a seemingly insatiable appetite for more compute and memory bandwidth. The maturation of die stacking enables the continued integration of system components in traditionally incompatible processes. A key application of die-stacking is silicon interposer-based integration of multiple 3D stacks of DRAM, potentially providing several gigabytes of in-package memory. The use of an interposer presents new opportunities; in particular, if one has already paid for the interposer for the purposes of memory integration, any additional benefits from exploiting the interposer could come at a relatively small incremental cost. In this talk, I will describe the exciting opportunities enabled though interposer-based integration including our recent work on reduced manufacturing costs. I will also explore some of the key challenges associated with communicating data across chiplet boundaries through the interposer.

Bio: Natalie Enright Jerger is the Percy Edward Hart Professor of Electrical and Computer Engineering at the University of Toronto. Prior to joining the University of Toronto, she received her PhD from the University of Wisconsin-Madison in 2008. She received her Bachelor's degree from Purdue University in 2002. She currently holds the Canada Research Chair in Computer Architecture. She is a recipient of the Ontario Ministry of Research and Innovation Early Researcher Award in 2012, the 2014 Ontario Professional Engineers Young Engineer Medal, and the 2015 Borg Early Career Award. She served as the program co-chair of the 7th Network-on-Chip Symposium and as the program chair of the 20th International Symposium on High Performance Computer Architecture. She is currently serving as the Vice Chair for ACM SIGARCH and ACM SIGMICRO. Her current research explores on-chip networks, approximate computing, IoT architectures and machine learning acceleration. In 2017, she co-authored the second edition of the Computer Architecture Synthesis Lecture on On-Chip Networks with Li-Shiuan Peh and Tushar Krishna. She is passionate about increasing the representation of women in computing, particular in computer architecture. She currently chairs the organizing committee for the Women in Computer Architecture group (WICARCH) and is co-chair of ACM’s new Council on Diversity and Inclusion.

Abstract: Augmented reality/mixed reality (AR/MR) is poised to move from science fiction to reality. AR/MR can create compelling user experiences by combining computer vision and computer graphics. Imagine users interacting with the world around them through their AR device. Visual search tells them what they are seeing, while computer graphics augments reality by overlaying real objects with virtual objects. AR/MR can have a far-ranging impact across many applications, such as retail, virtual prototyping, and entertainment. In this talk, I will describe my group's research on these complementary areas: graphics models for realistic visual appearance, and visual search and fine-grained recognition for scene understanding. We will also see how these technologies can go beyond AR/MR applications to enable visual discovery—using recognition as a core building block, we can mine social media images at a global scale to discover visual patterns and trends across geography and time.

Bio: Kavita Bala is the Chair of the Computer Science Department at Cornell University. She received her S.M. and Ph.D. from MIT, her B.Tech. from IIT (Bombay), and co-founded GrokStyle (recently acquired by Facebook). Bala specializes in computer vision and computer graphics, leading research in recognition and visual search; material modeling and acquisition using physics and learning; and material and lighting perception. Bala has authored 100+ peer-reviewed publications, the graduate-level textbook “Advanced Global Illumination”, and has served as the Editor-in-Chief of Transactions on Graphics (TOG), and as chair of SIGGRAPH Asia Papers in 2011.

Title: “Data in the Cloud”

Abstract: The cloud has forced a rethinking of database architectures.  Does this offer an opportunity to address the siloed nature of data management systems?  The question is especially important given the rise of machine learning and data governance. In this talk, I'll discuss these issues through the lens of the Microsoft data journey, both internal and external.

Bio: Raghu Ramakrishnan is CTO for Data and a Technical Fellow at Microsoft, and leads the CISL and GSL applied research teams. He has previously served as Chief Scientist at Yahoo! and Professor at the University of Wisconsin-Madison, in addition to being founder and CTO of QUIQ, an early online crowd-sourced question-answering company. He graduated from IIT Madras and received his PhD from the University of Texas at Austin.

At Wisconsin, he wrote the text “Database Management Systems”. His early work influenced commercial query optimizers as well as the design of window functions in SQL:1999. At Yahoo!, he led research for the CORE project that was the foundation for Yahoo’s personalized portal pages, the PNUTS geo-replicated cloud service deployed in 18+ regions world-wide, and Yahoo!’s web-scale information extraction for semantic results in Yahoo! Search. At Microsoft, he leads the CISL and GSL applied research teams, and led the development of Azure Data Lake, Microsoft’s exabyte-scale storage and analytics platform.

Title:We Are Often Working on the Wrong Problem

Abstract: In the DBMS/Data Systems area, many of us seem to have lost our way.  This talk discusses 10 different problem areas in which there is considerable current research.  Then, I present why I believe much of the work is misguided, either because our assumptions about these problems are incorrect or because we are not paying attention to real users.  Topics considered include machine learning (deep and conventional) , public blockchain, data warehouses, schema evolution and the cloud.

Bio: Dr. Stonebraker has been a pioneer of data base research and technology for more than forty years.  He was the main architect of the INGRES relational DBMS, and the object-relational DBMS, POSTGRES.  These prototypes were developed at the University of California at Berkeley where Stonebraker was a Professor of Computer Science for twenty five years.  More recently at M.I.T. he was a co-architect of the Aurora/Borealis stream processing engine, the C-Store column-oriented DBMS, the H-Store transaction processing engine, the SciDB array DBMS, and the Data Tamer data curation system. Presently he serves as Chief Technology Officer of Paradigm4 and Tamr, Inc.

Professor Stonebraker was awarded the ACM System Software Award in 1992 for his work on INGRES.  Additionally, he was awarded the first annual SIGMOD Innovation award in 1994, and was elected to the National Academy of Engineering in 1997.  He was awarded the IEEE John Von Neumann award in 2005 and the 2014 Turing Award, and is presently an Adjunct Professor of Computer Science at M.I.T.