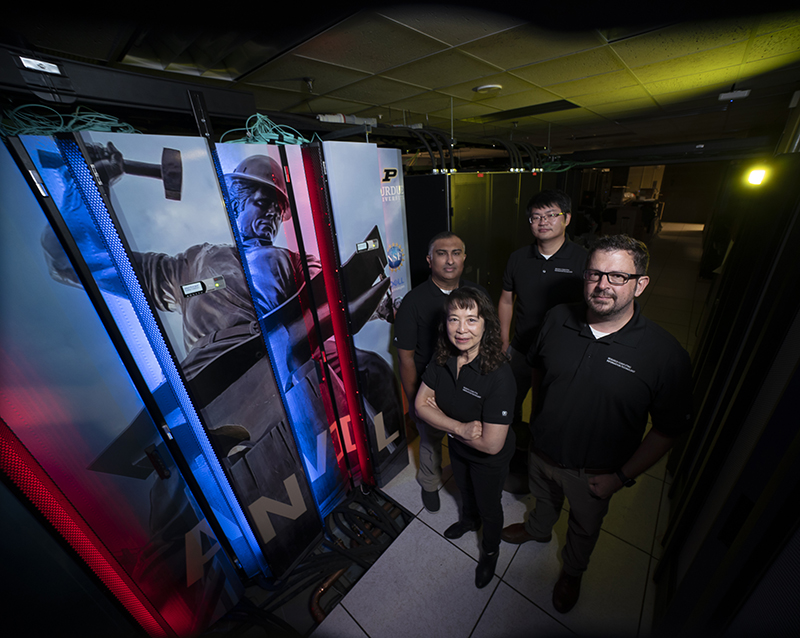 WEST LAFAYETTE, Ind. — Purdue University’s supercomputing power has leveled up in strength and speed with its new Anvil supercomputer. The new capacity will allow Purdue to contribute to the nation’s 21st- century research agenda by simultaneously powering scientific computational and data-driven tools at multiple universities.

Having begun operations in November, Anvil is now at full capacity, funded by a $22 million grant from the National Science Foundation. In its mission to serve as a resource for Purdue and outside institutions throughout the U.S., it already has facilitated work from over 20 institutions in its first four months of operation.

“Anvil is not only the largest capacity system Purdue has ever built, it’s the most diverse,” said Carol Song, senior research scientist for ITaP Research Computing and principal investigator and project director for Anvil. “Its various components are all integrated in one place with GPUs and large memory nodes complementing a cluster of 1,000 compute nodes. As Anvil grows, it is also able to take on much more heterogeneous workflows that are more common in the research happening today at Purdue.”

As evidenced by its use thus far, Anvil’s next-level strength and versatility promises to be a boon for Purdue researchers who have identified myriad potential uses for its computing power.

For example, Daniel Aliaga, associate professor of computer science, and his research group are exploring the use of Anvil's GPU capability to help facilitate the creation of “what-if” design tools in digital city planning. These futuristic tools will enable urban planners worldwide to automatically integrate, process, analyze and visualize complex interdependencies among urban form, function and the natural environment. In addition, Jonathan Poggie, professor of aeronautics and astronautics, is looking to use Anvil to speed up his study on the prediction and eventual control of the aerodynamic heating produced in flight at high Mach speeds.

Additionally, new treatments for heart disease are the promise of a project that came to Anvil from out of state. Yinglong Miao, an assistant professor in the Department of Molecular Biosciences and Center for Computational Biology at the University of Kansas, works in advanced biomolecular modeling and drug discovery. He is using Anvil’s power to accelerate his biomolecular simulations to unlock remedies for heart disease. “Using CPUs this work could take months, if not years,” Miao said. “With the GPUs on Anvil, we can run these simulations much faster. Instead of needing months, we just need a couple of weeks.”

Anvil’s current strength is now in a category that challenges the imagination. At peak performance, it can now operate at an astonishing 5.1 petaFLOPS (floating-point operations per second). A computer system with one petaFLOPS is capable of performing one quadrillion [1015] FLOPS. A one-petaFLOPS computer system can manage in just one second what would take an individual a calculation every second for 31,688,765 years. Multiply those individual calculations by a factor of 5.1, and the product is Anvil’s single-second peak capacity.

Anvil’s new power will significantly increase the computing capacity available to users of the NSF’s Extreme Science and Engineering Discovery Environment (XSEDE), in which Purdue has been a partner for the past 10 years. It will now be able to deliver over 1 billion computing core hours to XSEDE each year. In addition, 10% of Anvil’s computing power will be made available for high-impact initiatives including research partnerships with industry.

Anvil consists of 1,000 nodes, which are individual computers that consist of one or more central processing units (CPUs) together with memory. Each node has two 64-core, third-generation AMD EPYC processors and will deliver more than 1 billion CPU core hours to XSEDE every year. Anvil's nodes are interconnected with 100 Gbps Mellanox HDR InfiniBand. The supercomputer ecosystem also includes 32 large memory nodes, each with 1 TB of RAM, and 16 nodes each with four NVIDIA A100 Tensor Core GPUs (graphics processing units) providing 1.5 petaFLOPS of single-precision performance to support machine learning and artificial intelligence applications. Research on Anvil will be able to leverage a diverse set of storage technologies, anchored by a 10-plus PB parallel filesystem, boosted with over 3 PB of flash disk. Novel workflows will benefit from block and object storage systems also supported by Anvil.

More information about Anvil is available on Purdue’s Anvil website. Anyone with questions should contact anvil@purdue.edu. Anvil is funded under NSF award No. 2005632.

Purdue University is a top public research institution developing practical solutions to today’s toughest challenges. Ranked in each of the last four years as one of the 10 Most Innovative universities in the United States by U.S. News & World Report, Purdue delivers world-changing research and out-of-this-world discovery. Committed to hands-on and online, real-world learning, Purdue offers a transformative education to all. Committed to affordability and accessibility, Purdue has frozen tuition and most fees at 2012-13 levels, enabling more students than ever to graduate debt-free. See how Purdue never stops in the persistent pursuit of the next giant leap at https://stories.purdue.edu.